Apparently I am more enjoyable when writing about myself than anything else. Awesome. So I can just be a huge narcissist and people will read it up. (Get it? Like, instead of “eat it up?” Ha…ha…ha…).

Ok. There are so many things I could write about. Like, I worked for the Obama campaign in Colorado. I could write about that. Except I can’t really remember what happened. It’s just a blur of 90-or-so-hour weeks filled with calling people I didn’t know on the phone and having the same conversations over and over again. Not to suggest that I didn’t enjoy the repetition of conversations about whether Obama was ahead or behind in the polls, except, well, I didn’t.

I ate a lot of ramen. And a weird assortment of vegetables and one or two homemade pies provided by volunteers (no, I was not in the routine of baking anything given that I basically fell into bed every night). I lived with people who were wonderful Democratic supporters and we were all communal and familial and it was nice, if exhausting.

And about halfway through, they even gave me my own office — cool, right? My red county voted 40% for Obama, which was significantly better than predicted. Oh, rural folk, you are close to my heart.

In any case, it was an exciting deal. I like organizing things and having precise instructions. But it makes me wonder if I will ever have a long-term position in my life. Because most of what I’ve done thus far (professionally or in volunteer work) is bit-sized, small chunks of bigger projects.

Just now I was trying to think of the right parallel word for professionally in terms of volunteer work and it reminded me of a strange anarchist type person that I met in a pizza shop while I was registering voters. Of course, he and his brethren insisted they were voting for Gary Johnson, and by the end of the conversation he ended up sending me a link to the definition of the philosophy of “voluntaryism” that suggests all forms of human association in groups should be voluntary. It’s not a concept I’m completely at odds with, but then I also sort of think it’s a child’s philosophy (i.e. we should never have to do anything we don’t want to do), and I think there are real benefits to growing up (i.e. responsibility for one’s actions, making contributions to public goods even when we don’t really want to, etc). Granted, I have not read extensively about voluntaryism. But Wikipedia offers a offers a peak at it that only too clearly suggests it’s not much for social welfare. I’m pretty big on social welfare, social responsibility, that sort of thing.

What I’m really trying to show you is what my job was like, every day. When you start walking up to random people, registering them to vote, or trying to get them to actually follow through and vote, you open yourself up to all sorts of exposure to their ideas and world view. Sometimes they’re nice/thoughtful/grateful. Sometimes they’re opinionated/angry/confused. Almost always, if they open the door to having a conversation with you (literally or figuratively), people want to tell you what they think. And that is both interesting and occasionally mind-numbing.

If nothing else, I learned a great deal about things like voluntaryism, and I heard a great many personal stories about felons voting rights, veterans’ disabilities, shut-ins’ lives, oxygen tanks, illegal immigration, health care reform, Obama’s desire to alter the American flag, adoption, and religion.

So maybe I remember a few things.

Today I met His Holiness the Dalai Lama.

I am a lucky kid. People, do you know that he retired himself and the position of the Dalai Lama from politics altogether last year? So cool. He is now only a spiritual leader of his own volition. And although China disagrees vehemently, he has announced that the next Dalai Lama could be from outside Tibet and female. That is cool stuff.

Unfortunately, he still needs to be protected by a man with an assault rifle.

Quote of the day: “There is no need to kill anyone. They will die anyway.”

More to come, but bedtime for now.

Our mothers bring scraps, our fathers weep. For us, the politicians come making speeches; they declare what is right and what is wrong. They call for money, always more money. We watch and are subdued, as they cry out, with fists of rage to wave at injustice.

From where we lay, collapsed into the earth, we see a world like ash. Dust blows over us and we close our eyes. At the last, each of us is alone.

Yet together we are millions, hungry and quiet. Is this the wasteland? Is this the promised heaven?

For more flashes prompted by this week’s photo, and to learn more about flash fiction, visit Madison Woods and explore.

Socrates did not drink the hemlock:

1. He had been sentenced to death, yes, and hemlock was the way of things, but when the guard brought it to him, he sipped and found the taste unpleasant. Being a polite sort of man, he explained that he would prefer something less biting. He requested alternative poisons and the guard acquiesced – it was Athens, after all, and very civilized. His students were eager to be involved and suggested various options, which the guard acquired and brought on a tray. Socrates tasted each. Then he died.

2. He just refused. Socrates looked those jokers up and down and said, “Hell, no.”

3. The Athenian government never wished Socrates’ death. However, they saw the trial as an ideal opportunity to silence his criticism and gain control of his mind. They sent a guard to Socrates with a goblet of very strong sleeping tea. It was presumed hemlock, and he drank, believing his death imminent. The affair was entirely tragic. In the wee hours of the morning, though, authorities came to Socrates in his cell and carried him away. He was taken then to advise the government in secret. Unfortunately, he refused and so they removed his brain and created a Socrabot to emulate his thinking and aid them in their quest for world domination.

4. Socrates did not show up for the trial. He hid above the chambers and when they called his named he laughed loudly, disrobed and streaked his 70-year-old self through one door and out another.

5. When the guard arrived to deliver the hemlock, a fellow guard who was actually Socrates’ lover in disguise beheaded him. She dashed into the cell and scooped the old man into her arms, rushing out before it was possible to intervene. Then they escaped to live on an island.

6. Rather than attend the trial, Socrates sent Plato to appear on his behalf. He wrote a note, explaining that he would come back if they really needed to punish him for his non-crimes against the Athenian state, but that otherwise, he was going on holiday to Crete and would really appreciate it if the jury would be understanding and leave him to support the Greek tourism economy in peace.

7. If Socrates did not drink the hemlock, it would be because the world was a different place. It would have set a different example – that we do not execute one another for disagreeing with the powerful majority. It might have demonstrated how we can tolerate one another, that we can appreciate originality of thought. It might have been a significant moment, which would ultimately have allowed us to circumvent the creation of McDonald’s.

For the IndieInk Writing Challenge this week, Kelly Garriott Waite challenged me with “What if Socrates didn’t drink the hemlock?” and I challenged trencher with “Write a post between 100 and 200 words long that includes the words “pepper,” “boomerang,” “stockings,” and “bling.””

A café called Northpoint sits between my hall and (all of) my classes and happens to have a 1-pound any-style coffee special from 8-10 am and from 3:30-5 pm. There is also coconut syrup (= coconut lattes = oh, yes).

There is a language called Scots. I understand that this is a revelation of probably unforgivable ignorance. The alphabet is the same as English, but words are spelled and pronounced differently. And it includes exciting new and different words.

Guinness is better and on draft everywhere.

Shrubs line highways, and the sea is wild and just outside when you want it, and even now there are fields speckled with round bales, which is somehow like home, only greener.

Half of Aikman’s (bar) is in the basement. The owner, Malcolm, often works that half of the bar and even though I don’t think he remembers my name, we have had one long conversation about sociopolitical cultures, which I intend to take up with him again soon.

The creative writing culture of Scotland is immense and invigorating. Maybe it is not different from anywhere else, but I think that it might be, the way that Montana is. I wonder if it’s because it is escapist and agricultural at the same time, and also simultaneously wild and quiet. 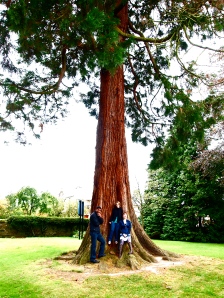 Courtesy of Brad, Who is Awesome, Although He is Not Scottish

And of course, there are cobblestones. And everything is old and real, like a story your grandmother tells you.

that one special fruit?

Error: Twitter did not respond. Please wait a few minutes and refresh this page.